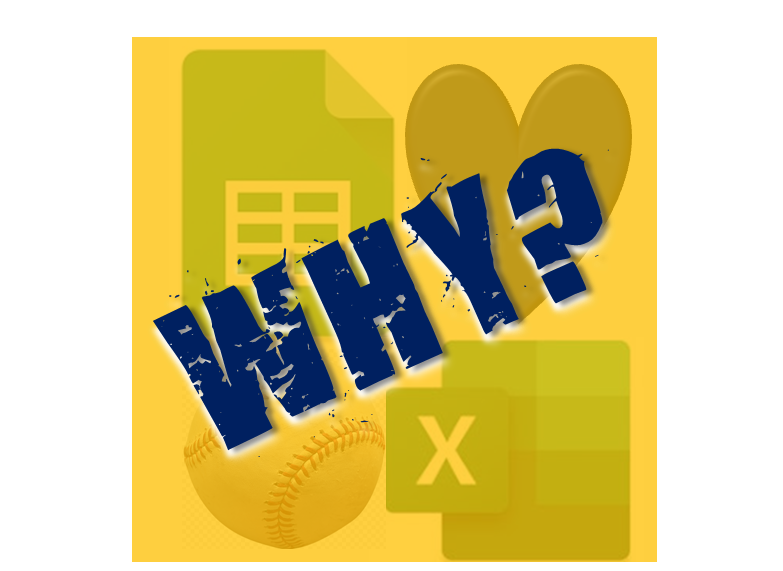 Who, without true nerd-pedigree doesn’t love to see spreadsheet changes naturally propagate, after only one simple edit?

There are many jokes, sincere & ironic, about “loving spreadsheets”. And if this project as a whole hasn’t made clear – when I make those jokes – it’s the former.

What hooked me as a kid was seeing that number-cascade in action, upon entry of one critical value, revealing new truths in a sheet I definitely cared about:

Anyways, it was the first year of Minors I believe (9 years old), that my father started keeping a book of statistics for the team in Microsoft Excel:

He wasn’t necessarily sharing the statistics week-to-week (maybe once at the end), as he was always looking out for his players to have fun and didn’t want to spoil a dozen 9 & 10 year olds’ Summers with a focus on money-ball.

[I also never hit the ball once this year…so maybe he was looking out for his son’s ego. Thanks Dad. The ball hit me in my first game against a kid-pitcher, and a couple more times soon-after…so I was hitless, scared-shitless that year until when for the next Summer Dad handed me a bat and whipped a bunch of a whiffle balls at and around me to hit-away quickly. That worked. Thanks again Dad!]

While standing in the batters’ box as a 9 year old was terror-inducing, it was made up every post-game when Dad would sit at our computer and input Walks (BB), Strikeouts (K), Hit Outs (F#, #-#) Fielders’ Choice plays (FC), Errors (E), Sacrifices (SH), & Hits (1B, 2B, 3B, HR) into his spreadsheet for each player on our team. I’d stand by just to see the instant reveal of newly-accurate Plate Appearances (PA), At Bats (AB), On Base Percentage (OBP), Batting Average (AVG), & Slugging Percentage (SLG) values, updated in real-time to show what was true now, based only on the isolated bits of information he had just given it.

The automatic propagation had me mesmerized, and ability to label, style, & write your own data-tables had me hooked. I went on to then…
A.) do much better as a hitter in the following years (aside from a weird one-year slump in HS) inspired by wanting to see better numbers form out of the Excel-ether on our family computer’s screen each week, & also…
B.) start fiddling with spreadsheets myself.

Among other sheets (probably comparing Digimon & Final Fantasy characters & other important things), I went on to create one for paystubs at my first job, always knowing my hourly take-home average (and caring much more about this than the actual job) at McDonalds from the time I was 16, then diligently worked another sheet that I was given as a tracker for a college sales job, and years later made some very spectacular deeply-nested sales trackers that were adopted by a larger organization I was part of. (Admittedly this was better work than they received in the areas they were actually paying me for…a pattern maybe?)

Many of you (if you’re still reading this, you’re probably in our camp) have your own impressive sheets for your personal finances, businesses, or hobby, and nothing I’ve shared so far has been remarkable beyond that…nothing until Hierank!

One goal of this venture was to minimize input values, and maximize output values, or to know the most possible about the nature of each team’s power & performance, but with the simplest & most-intuitive framework we could build.

To that effect, Hierank takes only three input values for each contest:

Then see how after the first entry, most values change some:

It’s with every single one of these inputs – across 250+ teams, each with 10-15 match-ups – that Hierank increasingly learns more in one season about each team’s relative performances than any human mind could singularly comprehend.

I’ll be diving in right now (9/29 approx 6pm EST), and inputting scores for the next 2-3 hours – starting with the FCS ‘A’s, at Abilene Christian.

I’m serious about enjoying the number cascade – and if it has any appeal to you as well, you’ll find it throughout the page over the next 2-3 hours, and most-prevalently if you find my curser.

In case you missed all the other hyperlinked cues: