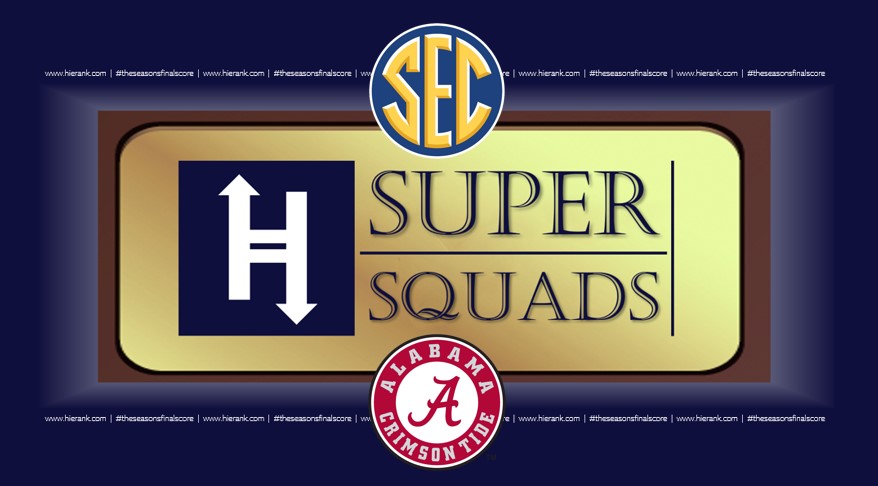 This is the 23rd post in our 25-part Super Squad Series, recognizing the best programs over the last three years in every single Division I FBS & FCS Conference, as well as the upperclassmen & staff who’ve anchored them.

Before getting too into their accolades – and their record as arguably the best College Football program in modern history – let’s count down their Southeastern Conf runners-up from worst to first:

“Always a Bulldog, never a Bride.” Is that how it goes?

The remarkably-consistent, ever-impressive, and perpetually-almost-great Georgia Bulldogs have seemed stuck at SEC second-fiddle for most of the prior decade.

As the only team on this list to make their conference dance all three years that we analyzed, tragically the only year that they won it (2017) they were still bested two games later by SEC-rival Alabama with the stakes raised then to National Championship-level.

More frustratingly for Bulldogs fans, rather than gain the top-spot in 2019 from a waning Alabama squad, they were leap-frogged by hungry LSU, who went from ‘solid’ in 2018 to having one of the best seasons of all time just last year.

Waning but not waned.

It’s only against the outrageous bar of expectation that Alabama has raised for themselves as 2017 National Champions and 2018 National Runners-up, that a 2019 #7 finish (Hierank) could ever be perceived as ‘underwhelming’ for this list.

Even with LSU‘s perfect season in 2019, the Tide’s consistent dominance plus ability to bring home the big prizes the last three years is unmatched, earning a National Title, a National Runner-up, an SEC Title, and a Citrus Bowl Win all during this period.

Prior to this period, the Tide had won the last three SEC titles and four of the last eight National Titles.

Theirs is a program that’s exhibited incredible dominance with untouchable consistency for a dozen years now. As we said – waning but not waned. Never count Nick Saban out.

Congratulations all Alabama coaches, staff, administrators, players, and especially the 41 young men present on the roster all three years that earned this title!