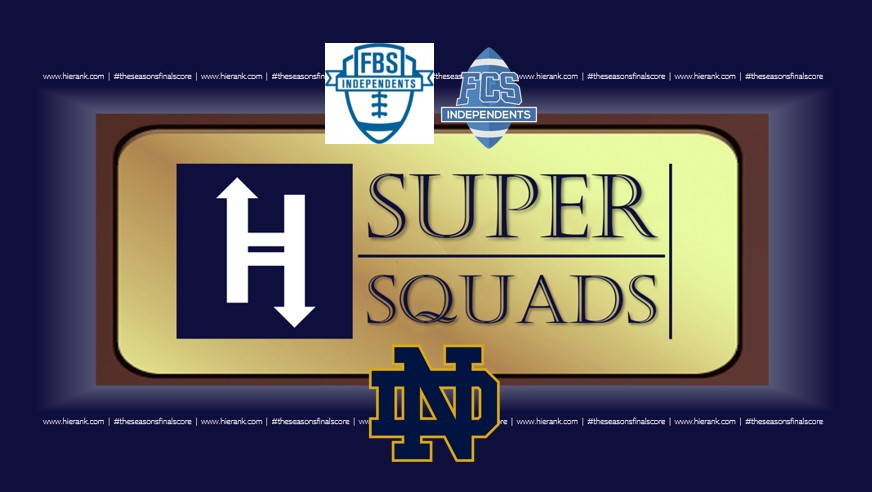 This is the twentieth post in our 25-part Super Squad Series, recognizing the best programs over the last three years in every single Division I FBS & FCS Conference, as well as the upperclassmen & staff who’ve anchored them.

For the second week straight, we’ve had a winner obvious enough that we decided to ask you yesterday for the runner-up. Choices below:

And you came through. The crowd got it right, check our poll or scroll this countdown for the answer.

First, congratulations to the Notre Dame Fighting Irish for being our College Football Independents 2020 Super Squad Champions! Kudos to your entire program, especially the 49 young men who were on the roster each of these three years – 2017-18, 2018-19, and 2019-20 – listed here:

But before getting too ahead of ourselves, let’s count down their independent cohort from worst to first:

Over the last three years, the Irish have found themselves consistently on the edge of playoff considerations.

In these considerations, their independent status proves both a blessing and curse for the program’s national standing. Their open schedule allows them to face more high-profile competitors; but it also denies them the validation of winning a competitive conference title.

Given the playoff opportunity in this squad’s best recent year, they fell decisively-short to the eventual National Champion Clemson Tigers 30-3 in the semifinal, putting a disappointing end to their until-then perfect 2018 season.

Congratulations all Fighting Irish coaches, staff, administrators, players, and especially the 49 young men present on the roster all three years to earn this title!